Many of you have likely seen the articles recently on the huge bumblebee die-offs in Wilsonville, Oregon and Hillsboro, Oregon where as far as anyone can tell – blooming linden trees were sprayed with the insecticide Safari, which led to a massive die off (on the order of 50,000+ bumblebees, and other honeybees). In case you hadn’t…

There are numerous other articles that a quick Google search will allow you to track down, but in our little piece of Oregon – this has been pretty big news this past week.

I personally started keeping bees because of what I was reading regarding Colony Collapse disorder, and the dying off of pollinators worldwide. (I’d be lying if I didn’t also tell you that our own honey wasn’t a motivator) but realistically – out of the 100 most important staple food crops in the world, which provide 90% of the world’s population’s food – bees pollinate 71 of the 100.

Which is why when I see things like what happened in Wilsonville and Hillsboro, I get upset and frustrated.

Imagine my ire when I received a phone call from my wife today while I was at work, telling me – after work, you’ve got to get down to Chemeketa and Court Streets… there are a ton of dead bumblebees. Now – Chemeketa and Court are approximate 2.5 miles from the house – within the range of our girls if they want to work hard – I don’t know if there are any other Lindens on our end of town that could have been treated… but downtown Salem has a bunch of Linden trees, they line both sides of Chemeketa Street, line the front of the Capitol and down towards the courthouse on Court Street, and are sprinkled throughout the cities downtown. (They smell amazing right now – kind of a limey honey scent) which is why the trees are literally buzzing with HUNDREDS OF THOUSANDS of bees, bumble and honey.

They’re all over the place.

Unfortunately, littering the sidewalks of the city today (not nearly in the numbers that we saw in Wilsonville and Hillsboro – at least not yet) were numerous dead bumblebees and honeybees. (The ratio of bumblebees to honeybees was significantly higher)

Now – basic principle of science… Correlation is not Causation. There are numerous bumblebees in the area, they are all pollinating these Linden Trees, sometimes bees die, or get so laden that they fall to the ground where they can get smashed – it’s possible that is all that happened, but with what happened in Portland, same trees, same bees, only variable is whether Safari was applied… I suppose time will tell. I have a call into the guy with the city who is in charge of the spraying to see when these were last sprayed and with what.

I took some photos which I’ll place below. I also took a couple of videos of some odd behavior in the bees. One bumblebee just kind of wandered around aimlessly on the ground in circles, another was sitting in the grass doing repetitive cleaning behaviors when prodded. Most of the bees I came across today where clearly dead and laying on the sidewalk, in the bark dust, or in the grass, or twitching their last death throes. I probably counted a total of 50-75 between those two streets. Again, nothing like up north, but concerning nonetheless. 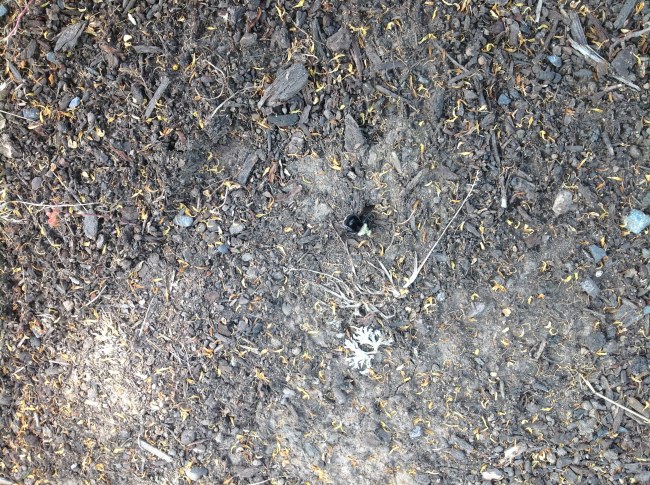 One of the first dead bumblebees I found.

2 within 18 inches of one another.

One of the Linden Trees in Question

Hopefully nothing more than a few dead bees that were in the wrong place at the wrong time, and not the beginning of something more significant, only time will tell. 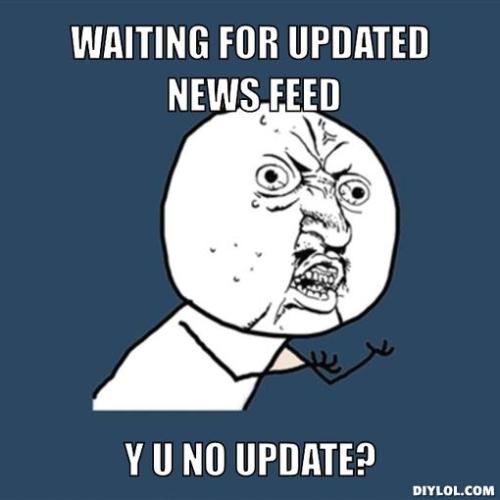 My apologies for the lack of updates lately – it’s kind of a weird concept now that I have people that are following the blog that aren’t people I know personally, it used to be the only person that read this was my mother, and even then, not regularly and she was my sharpest critic… but now that there are others that follow us, and actually pay attention, I guess I need to be a bit more cognizant of updating this thing more frequently.

School finished up with a bang – and I got my grades done, room clean… had one day off, then boom. Back to work. I’ve been slowly adjusting to the different hours, as well as the different kind of work entirely.

During the summer I continue to work for the school district, but I shift to hourly maintenance work with their structural crew. I’ve done that for a while now, love the guys I work with at the shop, but I hate that it always takes me a week or two to get the glazing muscle memory back. I’m finally starting to get there, and the last couple of days it doesn’t feel like I’m constantly behind and fumbling with things. It’s beginning to become more automatic, and my body is adjusting to the work allowing me to actually have the energy to tackle things on the homefront when I get home.

One of the pluses of the job is the scenery always changes – as we’re mobile, it’s like a field service type position, so it’s not the same thing all the time. It’s always different. For example – this morning, I saw these two as we drove to a school to get a measurement on a window a kid blew out with a big rock. Walking right through Ben Miller Park in Keizer – definitely not a common sight. 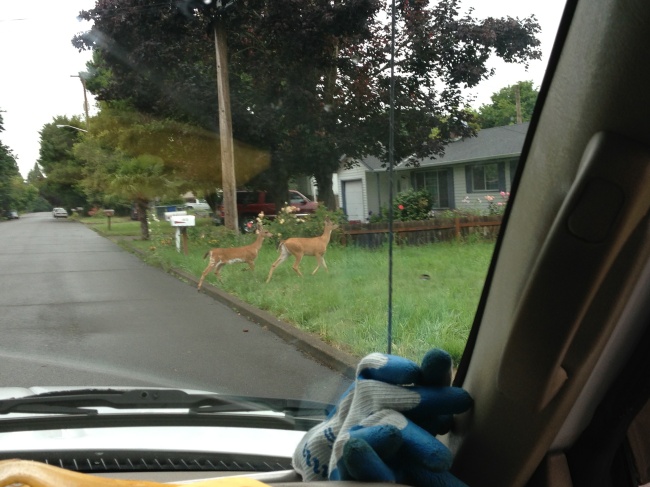 As you might have noticed from the picture, we’ve been a bit soggy here the past couple of days, and not much has gotten done except of course the crops have been watered. Once the heat returns, we’re going to see some things go crazy, which should be fun to see. We’re up to our ears in peas and fava beans right now, in fact – the peas on the on bed we put the trellises on at first are taller than I am. They’re thriving, and Thing 1 cooked up some of the fava beans for dinner tonight with mom’s help. So good.

I have one set of peas that kicked out the prettiest purple flowers (I need to get a picture). I’m seriously considering cross pollinating them to try to see if I can’t get them producing the purple consistently. Anyone ever have any luck doing that kind of stuff besides Gregor Mendel? I’m pretty sure they’re one of our heirloom variety and would come out true, and the bees would LOVE them.

Speaking of the bees, they’re doing awesome. It’s become clear in the last couple weeks that they are here to stay – there has been lots of activity on the shallow on the top where they originally took roost, I thought they were only one a couple of frames, but in looking at it, it seems more like they have begun going from one side of the shallow to the other cleaning and drawing out comb to repair places it was messed up. They’ve been busy.. as.. well… nope, not going to do it… They’ve been busier than a one toothed man at a corn-on-the-cob eating contest… than a cat in a room full of rocking chairs? Than a one armed man at the opera following the aria??… fine… a bee. Busier than a bee.

Loads and loads of pollen is coming in, all kinds of different colors… just been a blast to sit and watch as I’ve had the time. One gave me a flyby though when I went out tonight to scope things out – some of the catnip that Shannon planted has come up in their flyway, and I moved it back to see if they have been removing any dead bees and piling them in front of the hive and when I moved it back – one of the soldiers popped out and gave me a “Maverick” style fly-by to say, “Hey Pal… back it up.” Might need to trim those catnip plants to make it a bit easier access.

The front yard is slowly but surely changing – we were in no rush as we planned to have it in in time for fall crops, and as such I’ve got a bit of time left to get it done, but time is running out. I got the two sets of boxes built in the center. They’re 12 feet x 4 feet both directions. With a 4×4 side box. We’re going to bark dust in between the boxes and gravel the pathways as soon as we get the weeds killed with cardboard… but for now, we’re ‘THOSE’ neighbors. Go us. 🙂

The library has been a HUGE success. People are coming and going with books constantly, new titles coming in, other titles going out – some are even returning home after they get checked out which is awesome! The guestbook has been signed by a lot of folks, who have all had wonderful things to say about it. If you are considering putting one in… do it. I have met more people, and it serves as a great conversation starter (so does our front yard which looks a bit like a disaster right now…) Here’s how that conversation goes.

Me: Hey – good to see you guys. Yeah, go ahead, grab a book.
Them: This is neat – where did you see this?
Me: It’s national thing, we were the third in Salem, and there are others going in all over the place… besides, we were working on fixing up the front yard, and figured it would look cool out there on the sidewalk.
Them: Oh… yeah… fixing it up, well, it looks… um… I see what you’re… well… *AHEM* Look at the time, thanks for the book!! *Flees rapidly*

I know. I know. It looks like Chernyobl… I promise, when it’s done it will look TREMENDOUS! At least, that’s what I keep telling Shannon.

That’s what’s going on in our world right now, I will try to do better about updating semi-regularly. I’m still trying to talk Shannon into writing some posts, particularly as of the two of us, she’s the writer… but she keeps complaining about this ‘motherhood’ thing, and something gets mumbled incoherently now and again about ‘kids’… then she intermittently gets this facial tick. I don’t know, I think she might want to get it checked out…

In Ben news, I will be starting the Couch to 5K program here in a couple weeks after I get back into the swing of things. I will be using that as a springboard to begin running more regularly and depudgifying. I will be blogging about the journey in a different place. I’ll give you the address if you all want to listen to a fat guy whine about fat people problems once we get a bit closer. Maybe this time, the change will stick…

Until next time,
Ben

Life has been insane of late with school ending and summer job starting – haven’t had much time to even breathe, let alone get outside and get updates done. I managed to get out and take a couple of pictures the other night though…

Taken from the back corner of our property where the girls head out on their daily jaunts.

What We Ramble About